The Institute for International Business Communication (IIBC) publishes interesting data each year regarding the TOEIC exam.

Here are 5 interesting statistics from this report shared in TOEIC's official site. 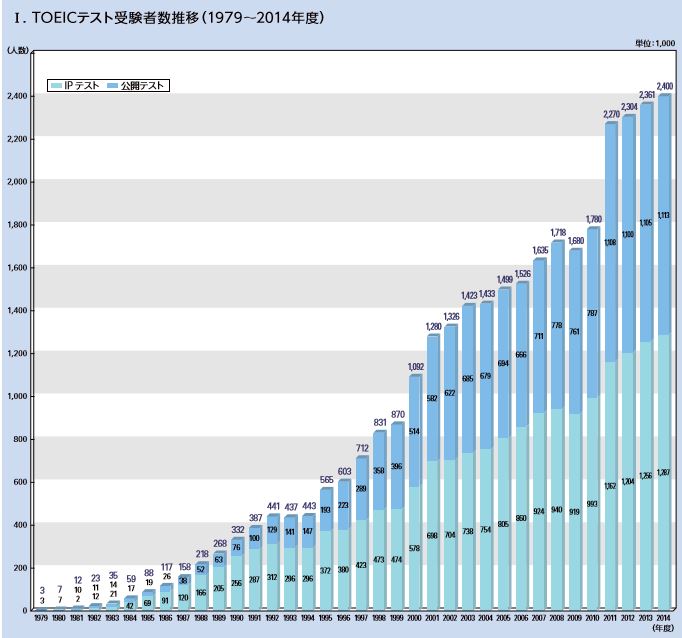 This data reflects the growing interests and requirements of Japanese(Korean) people in English.

The TOEIC test has been taken over 2 million times each year after 2011. The latest result published recently showed that this number further increased to 2,556,000 in 2015.

A list of the average test scores from a given country/region is shared in the "TOEIC テスト Worldwide Report 2013" results.

Looking at this list, many of you may feel that this data is somewhat faulty as I did.

One important thing to note is that this is the average score of all valid test results taken within that country. It does not take into consideration the number of test takers (although it does leave out countries/regions with less than 500 results).

The TOEIC exam is delivered globally across 150 countries but the purpose of the test is somewhat different depending on the countries.

TOEIC is a test popular in Japan and Korea. In these countries, people take this test multiple times a year to test their english knowledge. This includes applicants that have just started to learn english, thus making the average score lower.

In other regions, people take this test for specific reasons such as applying for a job. These applicants do not take the exam while studying but instead take the exam only after they have learned english.

In other words, the TOEIC exam is taken for two purposes.

Althought this data may be a bit misleading, this is an interesting result as long as we are aware of this bais.

3. Type of Language Skill Most Emphasized When Studying English

There are 4 skills in learning a language (listening, reading, speaking, writing). After each tests, the test-takers were asked to answer a questionare. This data shows which skills the test-takers emphsized the most during their studies.

25.9% of the test-takes indicated that all four skills were emphasized during their study followed by 25.6% answering Speaking and Listening skills were important.

From this data, we can tell that the mojority of the people think that it is important to be able to communicate (Listen and Speak) in english more than the comprehension skills (Reading and Writing).

Contrary to this data, many people in japan mark high scores in reading and writing. Although TOEIC does not measure speaking skills, Japanese people tend to struggle most in achieving speaking skills.

This is why i tell many people that they should focus on the type of skills they wish to gain. Although many say they want to speak engilsh, they spend a lot of time facing textbooks. Textbooks are good to gain Reading/Writing skills but in order to gain Speaking skills, you should spend more time communicating, learning to express your feelings with words.

What surprised me was that there were more people that said they use speaking skills (11.6%) than writing skills (3.7%). I expected speaking skills to be the lowest since we hardly speak in english living in Japan.

The last data is the purpose for taking the TOEIC exam.

As mentioned before, these are two major purposes people take the TOIEC exam.

As these results show, focus towards english is increasing each year. People feel the need to gain the skills to communicate in the global language.